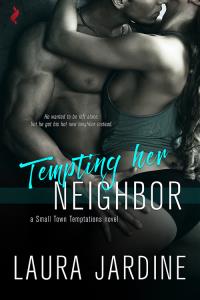 I’ve said in a few places that Tempting Her Neighbor was inspired by Shrek. It’s true. The hero, Cole, was partly inspired by the main character in one of my favourite movies.  Though I think Cole and Rachel’s relationship is more like Donkey and Shrek’s relationship than Fiona and Shrek’s.

I hope that doesn’t sound too weird.

But I also wrote this book because I was annoyed by all the romances I’d read in which the hero was a playboy and the heroine was fairly inexperienced. Annoyed that whenever I read a book with a heroine who had a reputation for sleeping around, that reputation turned out to be either wildly exaggerated or completely false. Or, in one book, the heroine had indeed been sleeping around in high school, but she had an ulterior motive for doing so—it wasn’t because she really loved sex.

In one case, I had been looking forward to a particular character’s book because she had a reputation for having lots of hot sex. It was the third book in the series. And then it turned out that…that reputation was all talk. I was disappointed.

Not that these were bad books. Some were wonderful.  They just weren’t what I was looking for.

So I wrote what I wanted to read.

Rachel has sex because she likes it. At the beginning of the book, though, she’s having a bit of a dry spell, in part because she’s tired of sleeping with men who see her for nothing but her reputation. Cole is new to town, from Toronto—to which she’s always longed to escape—and he’s hot (of course) and doesn’t have any pre-conceived ideas about her.

Is Rachel’s reputation exaggerated? Maybe a little. But the problem is more that it’s the only thing people focus on when it comes to her. In this small town of 1,200 people, that’s what defines her.

Cole, in contrast, isn’t terribly experienced. Because, well, he doesn’t really like people.

Now, it’s not like Tempting Her Neighbor is the first such book. There are certainly others. For example, Bella in The Shameless Hour (Sarina Bowen) and Akira in The Gentleman in the Street (Alisha Rai) are somewhat similar heroines. I love these books and recommend them. But compared to the large number of romances with playboy heroes, there aren’t many.

So I flipped the playboy hero trope and also made the heroine the one doing the pursuing, not the other way around. Kind of like Donkey and Shrek—Donkey wants to be Shrek’s friend, and Shrek wants to be left alone.

There were two other things that had been bothering me in the books I was reading. One was that the heroes were inevitably over six feet, which, in my opinion, is rather inconvenient for kissing if you’re short like I am. Cole is 5’7”. The other is that contemporary romances often present an idyllic view of small-town life, which isn’t always a basket of roses, especially when everyone looks down on you for your sex life.

Rachel wants to escape Georgeville, but she’s terrified of  leaving the only life she’s ever known.  She decides she’s finally going to do it…and then she starts falling for Cole, who has just moved to Georgeville because he wants peace and quiet. And at the end *SPOILER* Rachel hasn’t changed her mind and decided that small-town life is lovely after all.

I love playing with tropes in the romance genre, and this often inspires the stories I write. I hope you enjoy Tempting Her Neighbor.