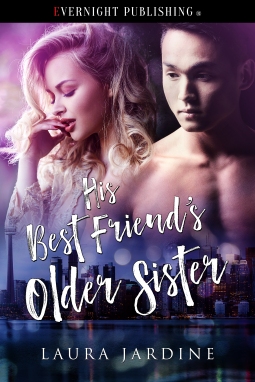 Finance whiz Emily Branson is afraid of relationships. But when she sees how happy love makes her younger brother, she wants to try dating again. However, there’s another hurdle. Although she wants sex, she hasn’t enjoyed it in the past, and she’s embarrassed by her horrible acne and birthmark.

Solution? Get her brother’s best friend to teach her how to have fun in the bedroom.

Construction supervisor Jay Cheng likes to go out and have a good time. He’s not interested in commitment. Emily’s idea sounds crazy, but he won’t turn down the first girl he ever wanted, as long as his best friend never finds out.

Overcoming Emily’s discomfort with revealing her skin and trusting someone proves harder than anticipated, though it ultimately leads to some very sexy role-playing. It feels like they’re becoming closer—and not just physically.

“But that’s not the only reason I’m out here,” he said.

They looked at each other at the same time. Her skin heated and prickled under his gaze. Uncomfortable, but also exhilarating. She wanted to hold on to this unfamiliar sensation.

“What’s the other reason?” she asked softly.

Only her brothers called her that. And Jay, apparently. She’d known him for a long, long time.

“I’m keeping myself away from what I can’t have,” he said.